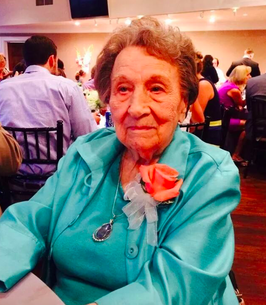 Share this tribute
Memorial Candles Lit for Edith | SEE ALL
Light a Candle
"We are honored to provide this Book of Memories to the family."
— Johnson's Funeral Home
Funeral Details Memory Wall Photos & Videos Plant a Tree

Print
Edith Cable Cooper passed away September 22, 2018 in Lebanon, Kentucky, twenty-nine days shy of her 100th birthday. She was born October 21, 1918 in Campton, KY, the daughter of Rosa May Smyth Cable and Casper Cable. She grew up in Wolfe County KY and graduated from Alvan Drew High School in Pine Ridge, KY.

She was married to Hubert Cooper for 58 years. They raised their family in Beattyville KY. She worked at Southside Elementary School and was very active in Beattyville Baptist Church. She taught Sunday School and played piano for church services for many years. After moving to Georgetown in 1995, she attended Faith Baptist Church where she made many lasting friends.

Edith was a woman of many talents, but, the one most appreciated by her family was her cooking. She was a marvelous Southern cook and could prepare Holiday dinners for 20 people without getting the kitchen dirty. Late in life she discovered her talent as an artist. Her specialty was still life paintings and she made her own Christmas Cards until her eyesight failed. She was an expert at crossword puzzles and could beat anybody at Scrabble.
Edith spent the past 2 1/2 years at the Village of Lebanon, Lebanon KY where she received excellent care and made many new friends among residents and staff.

To plant a tree in memory of Edith C Cooper, please visit our Heartfelt Sympathies Store.

We encourage you to share any memorable photos or stories about Edith. All tributes placed on and purchased through this memorial website will remain on in perpetuity for future generations.

From: Sandra Cooper Anderson
Share on Facebook
Plant a Tree in Memory of Your Loved One
An Honouring a Life memorial tree is a unique tribute which provides global benefits like no other memorial gift could.
Plant a Tree
Family Log-In