To share your memory on the wall of Joyce Wilder, sign in using one of the following options:

Print
Joyce S. Wilder, a long-time resident of Georgetown, KY, loving wife and mother of five children passed away at the age of 85 on September 5th.

Joyce was born on June 12, 1934 in Cumberland, KY to Raymond and Flora Sellars. She graduate... Read More
Joyce S. Wilder, a long-time resident of Georgetown, KY, loving wife and mother of five children passed away at the age of 85 on September 5th.

Joyce was born on June 12, 1934 in Cumberland, KY to Raymond and Flora Sellars. She graduated from Cumberland High School in 1950. After attending a one-year business program in Louisville, she returned home to marry her childhood sweetheart, Ronald Wilder. She worked various jobs but spent several years at KY Utilities in Cumberland, KY. Joyce and her husband Ronald then moved to Georgetown in 1973. She worked in the business office at Georgetown College for ten years. In the mid-1980’s she became the Sales Division Manager for World Book Encyclopedia.

Joyce and Ronald were members of the Georgetown First United Methodist Church. Joyce also was an active member of the community; examples include the Scott County Women’s Club and the Georgetown Book Club. She was also an avid bridge player.

Joyce Wilder is survived by her husband of 67 years, Ronald; sons Mike, Keith (Jan) and Philip and daughters Ronna (Robert) Love and Kathie (Peter) Winograd; two grandchildren Megan Love Sukrattanawong (Gary) and Matt Love (Mary); brother Bill Sellars and wife Mitzi, and their children Mia, Jamey and Telly; sister-in-law Nina Sellars and her daughters Judy and Cathy; Lora Click and her children Mary and Patrick and sister-in-law Nancy Wilder and her children Brooke and Jeff along with other family. She was preceded in death by her parents, her older brother Jack Sellars and younger sister Charlotte (who died at birth), her brother-in-law Murris, and Pat Click. She will be greatly missed.

A memorial service will be 3 PM Saturday, Sept. 21, 2019 at Johnson’s Funeral Home. Visitation will be 2 PM till service time. In lieu of flowers, memorials may be made to Georgetown First United Methodist Church, PO Box 1089, Georgetown, KY 40324.
Read Less

We encourage you to share your most beloved memories of Joyce here, so that the family and other loved ones can always see it. You can upload cherished photographs, or share your favorite stories, and can even comment on those shared by others.

Posted Sep 19, 2019 at 08:56pm
To Kathie & Peter Winograd and Family:
Our deepest condolences on the passing of Kathie's mother, Joyce Wilder.

Posted Sep 16, 2019 at 07:50pm
We lived just down the street on Clayton Avenue when our three boys were young. The boys would go down to Joyce and Ronald's home and offer to rake the leaves for Joyce or mow the lawn. She would always let them rake but mostly play in the leaves. The boys never quite finished raking the leaves but, Joyce would always pay them any ways. She said she was paid by the joy those boys gave her while she watched them rake and play in the leaves.
I will always remember Joyce's kindness and friendship. During a particular tough time for me Joyce surprised me with a cake and a simple gift of a wall plaque that said "When Life Gives You Lemon, Make Lemonade. It was a great day that I will always remember.

Posted Sep 14, 2019 at 05:01pm
Joyce was a member of the Scott County Woman's Club and that is where I met her. She always had good ideas and was very creative. Her sunny disposition made work seem like fun. I will miss her and I am sure many others will feel the same.
Comment Share
Share via:
WS

With Sympathy and Love, Rich and Kathy Schumann

Posted Sep 11, 2019 at 09:14pm
Dear Belle and Mary, We hope this memorial tree will be a lasting memory of your dear Aunt Joyce. We know how much she meant to both of you, and you are in our hearts especially now. Love from your Forever Friends! 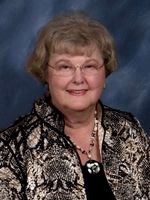