To share your memory on the wall of Lewis Hoffman, sign in using one of the following options:

Lew graduated from Garth High School in 1955 and attended Georgetown College. He retired from IBM after 34 years, having served in various management positions during that time.
Lew was a lifelong active member of the First Presbyterian Church. He is recognized as being the longest continuing member of the church, serving as deacon before being ordained as an elder. As part of his church work, he and other members started the Georgetown Child Development Center. In operation since 1972, this was the first public daycare in Georgetown.

Lew was always an active volunteer but in retirement, he was able to focus full time on giving back to a community he loved. He served two terms on the Scott County Board of Education, as a member and also as chair, and was instrumental in the establishment of Scott County’s preschool program. Lew was appointed to the Scott County Parks and Recreation board for two terms and served as chair. Lew worked with the Amen House regularly and was recognized for his 25+ years of volunteer efforts. Lew was in charge of the Meals on Wheels program for 24 years. He served on the board of Scott County United Way, the Cardome Center Board, and Child Development Board as well as working with Habitat for Humanity. His wide range of activities prompted him to receive the Jim Reid Community Service award given by the Georgetown-Scott County Chamber of Commerce and to be inducted into the first class of Scott County Hall of Fame for his contributions to the community. Lew loved people and was friendly, kind, and accepting of all. He was a compassionate caregiver to his family and described by friends as a “gentle”man. Lew was unassuming and did not seek recognition but only wanted to serve others.

We encourage you to share your most beloved memories of Lewis here, so that the family and other loved ones can always see it. You can upload cherished photographs, or share your favorite stories, and can even comment on those shared by others.

Posted Oct 29, 2019 at 05:53pm
My HS and College days in Georgetown were filled with many, many good times on Hiawatha. The evenings on the deck, the swim meets on the road and the connection with the Presbyterian Church were huge landmarks in my memory. Lew gave me my first basketball officiating shirt and often provided needed guidance in those days. For Barbara, Leslie, Tracie, Bo, and Kay my heart hurts for you this evening. His wisdom, always with a theme of "champions of character," that Lew provided me during the 70"s, is a gift I've always attempted to pay forward. Through the holes in the floor of heaven, I'm sure Lew will continue to watch over all family and friends.
Comment Share
Share via:
LK

Posted Oct 29, 2019 at 08:48am
I would like to extend my deepest sympathy to the family and extended family of Mr. Lewis Hoffman. Growing up with his daughter, Leslie, was made special by her parents’ many kindnesses and gracious hospitality. I will never forget those fun times at their house. My prayers are with you all. Julie Tackett, Lexington, KY.
Comment Share
Share via:

Posted Oct 26, 2019 at 07:03am
A good man... what more needs be said? We served together on Habitat for Humanity Board for several years. He was a valuable asset to his community. He will be missed but remembered
Comment Share
Share via: 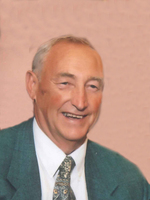