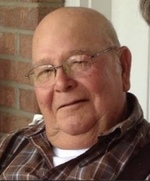 John Wesley Jenkins, 82, husband of Evelyn (Wade) Jenkins, passed away on Tuesday, February 4th, 2020. He was born on April 23rd, 1937 in Georgetown, Kentucky, son of the late Reynolds T. Jenkins Sr. and Dorothy (Arnold) Jenkins. John served in the United States Army and was a member of Newtown Christian Church. He enjoyed fishing, golfing and was an avid poker player. In addition to his wife, John is survived by his two daughters, Allison (Eddie) Catron and Hannah (Mark) Turner; four grandsons, Wesley Catron, Lukas Catron, Chase Turner and Jonathan Turner. Besides his parents, John was preceded in death by his sister and brother. Visitation will be on Sunday, February 9th from 11am until time of service at 1pm at Johnson’s Funeral Home. Burial will be in Crestlawn Memorial Gardens. Serving as pallbearers will be John’s grandsons and sons-in-law. Memorial contributions may be directed to The American Kidney Foundation, 30 East 33rd Street, New York, New York 10016 or the Shriner’s Hospital for Children, 110 Conn Terrace, Lexington, Kentucky 40508.