To share your memory on the wall of Joseph Mefford, sign in using one of the following options:

Print
Joseph Wayne Mefford, II, 46, husband of Tara Walling Mefford, passed away Wednesday, March 4, 2020. Born in Lexington and raised in Georgetown, he was the son of Joseph and Sheila Marshall Mefford.

A graduate and basketball player at... Read More
Joseph Wayne Mefford, II, 46, husband of Tara Walling Mefford, passed away Wednesday, March 4, 2020. Born in Lexington and raised in Georgetown, he was the son of Joseph and Sheila Marshall Mefford.

A graduate and basketball player at Scott County High School, he was a former printer with Lynn Imaging. He was an avid golfer and fisherman, loved going to the races with his dad and enjoyed drawing, woodworking and metal working in his spare time.

In addition to his wife and parents, he is survived by his daughter, Carly Bess Mefford; sister, Jessica Ann Mefford; grandfather, Joseph C. Mefford; and mother & father in-law, Ramona and Jerry Walling.

Services will be 2 PM Saturday at Johnson’s Funeral Home, conducted by Rev. Mike Currans. Burial will follow at the Masonic Cemetery. Casket bearers will be Kevin Mefford, Cas Walling, Ronnie Marshall, Josh Dailey, David Dunning, Justin Marshall, Dusty Adkins and Jeff Kirkland. Honorary bearers will be Eddie Marshall and Jay Marshall. Visitation will be 11 AM till service time. In lieu of flowers, memorials may be made in honor of his daughter, Carly Mefford c/o any WesBanco location.

We encourage you to share your most beloved memories of Joseph here, so that the family and other loved ones can always see it. You can upload cherished photographs, or share your favorite stories, and can even comment on those shared by others. 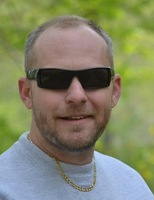