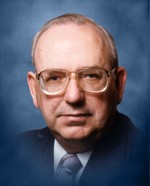 Lieutenant Colonel Charles C. “Sonny” Daniels Jr., 81, husband of Pamela Jean (Watts) Daniels, went home to his eternal rest with his Savior, April 10th, 2021. He was born on September 7th, 1939 in Cincinnati, Ohio, son of the late Bessie (Pace) and Lieutenant Colonel Charles C. Daniels Sr. Sonny and Pamela were married May 4th, 1968 in Cincinnati, Ohio. Lieutenant Colonel Daniels entered the Ohio National Guard as a High School senior at Hughes High School of Cincinnati in 1957, serving with the 134th Field Artillery. The eventual graduation of his Officer Candidate Class was accelerated to meet possible needs during the Cuban Missile Crisis of 1962. Later as a National Guard Officer, he commanded troops active in Cincinnati supporting police and fire departments during periods of social unrest arising from the Civil Rights Movement, the Vietnam War and during the volatile five-year period between assassinations. He later served as an instructor of Field Artillery on three of the combat arms posts and finished with an Army Reserve attachment to the Pentagon in Washington, D.C. Due to this service, he was awarded a Meritorious Service medal upon retirement. In civilian pursuits, he was first a very talented photographer, and later served contractors, manufacturers and distributors in the HVAC industry for over forty years. He fulfilled the role of a deacon for several years at White Oak Christian Church in Colerain, Cincinnati, Ohio, serving on the building committee when they broke ground on the new sanctuary in the late 1980’s. Sonny had been a resident of Georgetown, Kentucky for the past seventeen years and was a faithful member of Victory Life Church for over fifteen years and was a member of American Legion Post #24. In addition to his beloved wife of fifty-two years, Sonny is survived by his children, Cheri Daniels and Brandon Daniels, both of Georgetown; two sisters, Kathy (Bruce) Sherwood and Becky (Jeff) Sherwood, both of Cincinnati, Ohio; numerous nieces and nephews. Besides his parents, he was preceded in death by one sister and brother-in-law, Janet and Ben Millard. Visitation will be Saturday, April 17th from 10am until time of service at 11am at Victory Life Church with Pastor Gary Toney Officiating. Burial will be in Riverside Cemetery, Falmouth, Kentucky. Memorial contributions may be directed to Victory Life Church, 1141 Lexington Road, Georgetown, Kentucky 40324. Due to the current regulations, please wear a face covering and observe social distancing requirements while visiting the family.