To share your memory on the wall of Martha Garnett, sign in using one of the following options:

Martha attended Oxford High School in G... Read More
Martha Dean Garnett, 95, of Greenwood, IN, formerly of Georgetown, passed away at her home Monday, May 3, 2021. She was born November 14, 1925 in Lexington, KY to the late James & Ida Sams Mefford.

Martha attended Oxford High School in Georgetown, Kentucky. She was a longtime member of Connersville Christian Church in Cynthiana, Kentucky. Martha lived a full life as a wonderful wife, mother, grandmother, homemaker and she enjoyed cooking delicious meals for her family and friends. She will be greatly missed by all who knew her.

Funeral services will be 1 PM Thursday at Johnson’s Funeral Home, conducted by Rev. Glenn Redmon. Burial will follow in the Georgetown Cemetery. Casket bearers will be Larry Francis Garnett, James Orville Garnett, Robert Douglas Garnett, Bobby Dean Garnett, Clinton Alan Francis Shonkwiler and Jeffrey Lynn Lowe. Honorary casket bearer will be Kenneth Ray Barker. Visitation will be 11 AM till service. Due to current mandates, facial coverings and distancing will be encouraged. In lieu of flowers, memorial contributions can be made to Alzheimer’s Association and or American Cancer Society.

We encourage you to share your most beloved memories of Martha here, so that the family and other loved ones can always see it. You can upload cherished photographs, or share your favorite stories, and can even comment on those shared by others.

Plant a Tree in Memory of Martha
Plant a tree 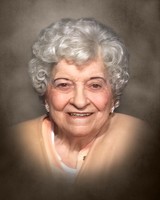