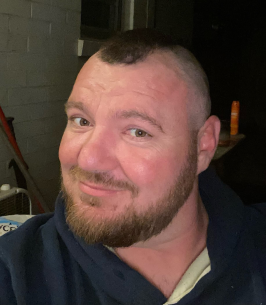 Joe “Scott” Wilkerson, 39, was brought into this world on September 3rd, 1982 in Fort Benning, Georgia, with his fists swinging ready to fight for everything and everyone that he loved the most - his family, friends, and his insatiable desire to make everyone laugh until they cried. Scott
always had a story to tell, with his own flare and intensity that attracted everyone’s attention. Even if we’d heard it a thousand times before, his zingers would always brighten up the occasion; even for himself.

Scott loved his family immensely. Whether it was dressing up as lackadaisical Thor for a cosplay with his oldest daughter, Killian; supporting his son, Liam, as his football coach; or pushing his youngest, Katelyn, to be the best volleyball and softball player she can be. Above all else, he always worked his hardest to provide for his wife, Raiden, knowing that even in the toughest of times he could always make her laugh and make the burdens of this world feel a little less heavy.

It is with this outlook on life that Scott’s wit, charm, and love will continue to live on through his story-telling through his family. Even if we’re unable to tell them as well as he did, we know that he’s listening and will let out his thunderous cackle from his enormous smile as his cheeks turn bright red. We know that when we see him again that he’ll come to us and say, “Hi, how are ya? Vote for Donnelly!”

Come celebrate this wonderful man’s life on Saturday, August 13th from 3pm to 5pm, at his in-law’s home at 451 East Main Street in Georgetown.