To share your memory on the wall of James Shepherd, sign in using one of the following options:

Provide comfort for the family of James Shepherd with a meaningful gesture of sympathy.

Jim Shepherd was a graduate of Georgetown College and received his Juris Doctorate from the University of Kentucky. He practiced law for 45 years and also served as County Attorney for Carrol County as well as Assistant Commonwealth Attorney. A proud life-long democrat, he was a member of Georgetown First United Methodist Church, an Eagle Scout and was a US Army Artillery veteran graduating from Officer Candidate School in Fort Sill, OK.

As an ardent student of Kentucky history, Jim Shepherd served as President of the Kentucky Historical Society (KHS) from 1998-2000 and was a member of the KHS Abraham Lincoln Society. He was also an appointed member of the Georgetown College Board of Trustees, his alma mater from 2007 to 2015.
Finally, Mr. Shepherd was among a group of pioneers and entrepreneurs at the dawn of the satellite cable television industry. In the late 1960s, he and fellow investors founded Ohio Valley Cablevision (OVC) that served communities in Kentucky, Indiana, and Ohio throughout the 1970s.

There are no events scheduled. You can still show your support by sending flowers directly to the family, or planting a memorial tree in memory of James Walter Shepherd Jr..
Plant a Tree

We encourage you to share your most beloved memories of James here, so that the family and other loved ones can always see it. You can upload cherished photographs, or share your favorite stories, and can even comment on those shared by others.

Plant a Tree in Memory of James
Plant a tree
0 trees have been planted in memory of James Walter Shepherd Jr.
AB

Posted Apr 10, 2020 at 09:55am
Jim Shepherd was one of those special people with whom I shared expenditure of energy and knowledge,. though his energy and brainpower were much in advance of mine. I was a neophite member of the Georgetown College debate team in 1054-55. We debated the very interesting subject: Resolved that the United States should extended diplomatic recognition to China. We were expected to debate either side of the question. I also shared college life with Jim's brother Jack. Their mother was graduated from college the same year as the boys; I took a photograph and wrote an article for the Lexington Leader and for the Georgetown College public relations department that was widely circulated. My sympathy to Lynne (she and Jim were my neighbors) and to their very handsome son.
Comment Share
Share via: 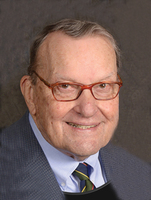