To share your memory on the wall of Jody Hambrick, sign in using one of the following options:

Provide comfort for the family of Jody Hambrick with a meaningful gesture of sympathy.

Dad enjoyed playing softball, working on cars and small equipment, tending to his yard, gardening, camping, singing gospel music, but most of all he enjoyed spending time with his family and his church family. As the 2nd oldest member of the church, he enjoyed singing in the choir, serving as elder and serving on many boards. Known for his “best hugs ever”, words of wisdom and being a “rock” of support to all that knew him, he had a way of touching people and leaving and impression that has lived on with his family, especially his grandchildren, that were the light of his life.

He will be greatly missed by his family and all that knew him.

To plant a memorial tree in honor of Jody Hambrick, please visit our Heartfelt Sympathies Store.

Donations are being accepted for: Georgetown First United Methodist Church.

We encourage you to share your most beloved memories of Jody Hambrick here, so that the family and other loved ones can always see it. You can upload cherished photographs, or share your favorite stories, and can even comment on those shared by others.

Posted Mar 11, 2019 at 06:02pm
Will miss seeing Joe out at Cracker Barrel on Tuesday mornings with his church group. Joe always would give yell...saying Good morning...always that big smile...and we would chat a bit as he was leaving. And to think last Tuesday would be our last laugh....but, it is never the end when you have given your life to our Heaveny Father...so to you Judy and your family...many prayers for all of you.

Posted Mar 11, 2019 at 03:33pm
Rest well Jody...we are thinking about you in the parts world here at Sutherland...Jon, Billy, Brent, Craig, Chris, Dave Hall, Scottie, and Doug. We have been talking about the good times we all shared at Thoroughbred....
Comment Share
Share via: 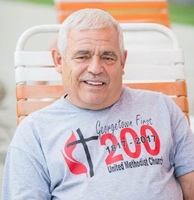